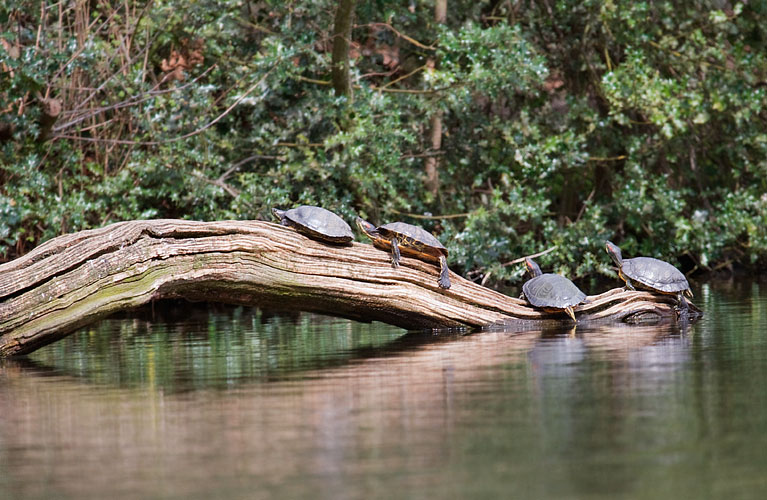 I’ve gone to France for a few days to look at Alpine wildlife and whilst I’m gone I’m going to be showing you a few alien species that have made London their new home.

….and these aren’t in a zoo, they’re basking on a log in one of our local lakes (Eagle Pond to be precise) but there others in other lakes and canals all around London.

It is widely believed that they’re all survivors of the Teenage Mutant Ninja craze who grew somewhat larger than their owners desired. These four are about ten inches long and have been in this particular lake for at least four years (from my sightings). Apparently they do lay eggs in the UK but there have been no reports of any eggs hatching in the wild here as it isn’t yet quite warm enough. We are warned not to approach them as they can bite and they carry Salmonella (as do most of our native species be they mammal, bird or amphibian). They’re also accused of eating baby duck-chicks but once again I’ve not ever seen any evidence of this and certainly the lake in question here continues to be home to a large number of native bird species with no obvious decline in numbers.

Back to the mostly native wildlife for tomorrow so I hope you’ve enjoyed a quick look at some of the local aliens….